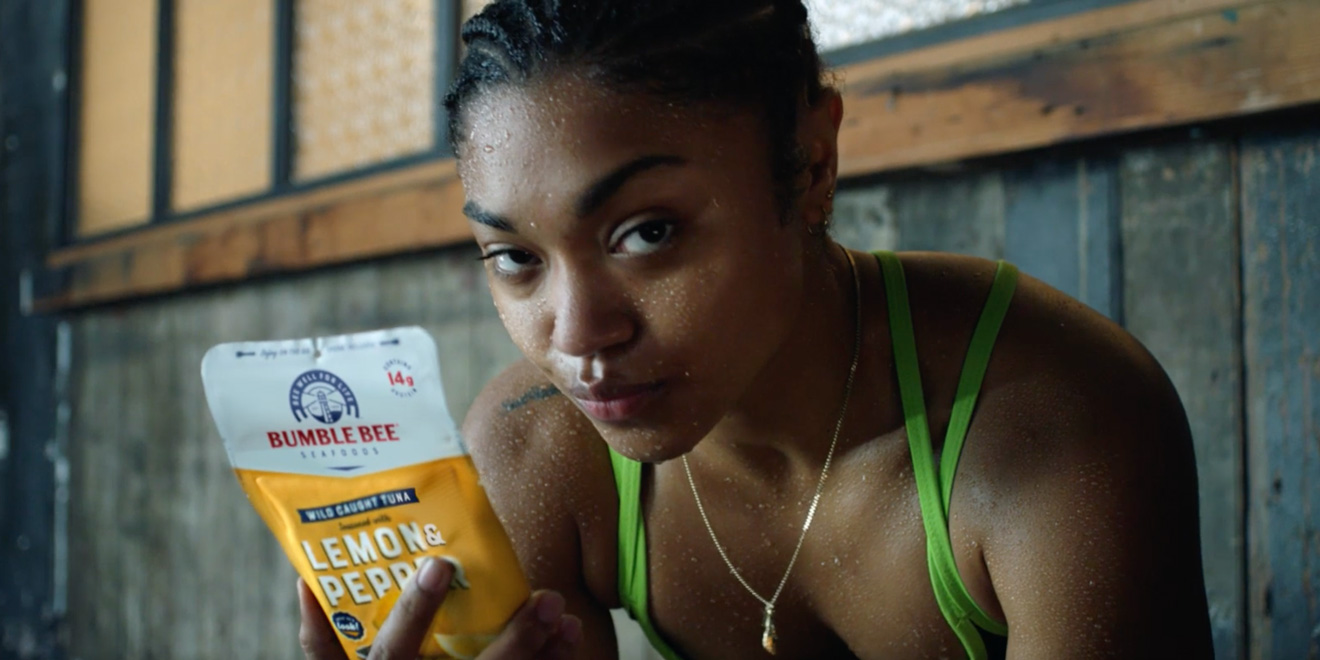 Bumble Bee Wants People to Reimagine What Tuna Can Be

After decades of decline in demand for fish in a can, restaurant closures and shelter-in-place orders during the pandemic have helped reverse this trend.

As an inexpensive source of shelf-stable protein, canned tuna is now a much-desired commodity. When panic buying reached its peak during the onset of the coronavirus crisis, the Bumble Bee Seafood Company saw sales double compared to the previous year. While demand has cooled since then, the company still expects sales to hover 10-15% above prior years for the remainder of 2020.

To build on this momentum, Bumble Bee is debuting an ad campaign, “Yes! Bumble Bee!” its first major marketing push in at least four years. Created with its agency of record, The Many, the effort encourages people to get creative with their tuna. In one 30-second spot, for example, a sweaty athlete picks up a pouch of lemon-and-pepper-flavored Bumble Bee tuna after a solid workout. In another, a man uses jalapeños, chives, onions, cheddar and tuna to make a tuna melt sandwich in his home kitchen.

“You can’t just tell someone that tuna is great; you have to force them to reappraise it,” Damien Eley, executive creative director and founding partner at The Many, said in a statement. “And it wasn’t much more complicated than isolating the awesome benefits of Bumble Bee tuna—benefits that people may not have known or have at least thought about for a while—and then finding the most unexpected ways in which we could deliver that.”

However, it’s not just about changing widespread consumer perception of the product, but making people realize it fits in with today’s culinary trends. Dan Hofmeister, svp of brand marketing at Bumble Bee Foods, noted that today people want foods that are high-protein, low-fat and low-sugar—and that tuna checks each of those boxes.

“This is a category that has been around forever, but tuna doesn’t get enough credit for how perfectly it fits into the lifestyle of so many people today,” Hofmeister said. “We knew we needed to reboot the way consumers are thinking about our product, and that’s what this campaign is really all about.”

The two aforementioned ads are scheduled to begin airing on linear and connected TV in select markets today, with two more spots coming in September. The advertising campaign, which was shot in Australia, will also extend to digital, influencers and various social channels, such as Instagram, Facebook and YouTube.

The positive waves for Bumble Bee are coming at a much-needed moment: Late last year, Bumble Bee Foods filed for bankruptcy following a price-fixing scandal involving rivals StarKist and Chicken of the Sea.

Similar to other CPG companies, such as McCormick & Co. and the King Arthur Baking Company, Bumble Bee also expanded its digital content offerings—in particular, recipes—during the pandemic. With more people cooking at home these days, the company has added a lot more content. At the beginning of the Covid-19 crisis, year-over-year web traffic to its site increased 100%, according to Hofmeister. It has since settled at around 50% higher than prior to the outbreak.

“We know consumers are searching for fresh, simple and healthy ways to prepare meals at home during the pandemic,” Hofmeister said. “Again, we see an opportunity to move from a back-of-the-pantry fallback option to a relevant and delicious front-of-the-pantry solution.”

I Love A Clean Planet